On the last craft club of term, we had requests to make an Easter craft.   As the children make so many Easter themed crafts at school anyway, it was tricky thinking of something that they could make in 30 minutes, didn’t require drying time, and suited boys and girls.

We decided on an Easter garland. 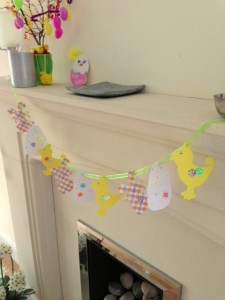 I made mine using pretty papers and some embellishments from my stash so the children had an example to look at, but the children used coloured papers provided by the school. 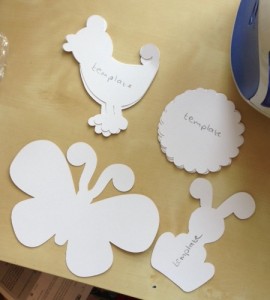 I made the templates using some card and my Sizzix Eclips cutting machine.   It uses cartridges so you can cut a variety of shapes and letters, and it is fully adjustable so you can set the size, material you are cutting and version of the image.   I made them all about 4″ tall and cut the shadow versions of the shapes to make them more substantial for the young children in the club. 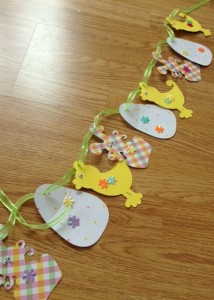 All I had to do then was make a hole using the small setting on my crop-a-dile, and then thread some ribbon through.   The children used wool to string their ones up as it’s a lot cheaper for 40 children to use that rather than ribbon.   They decorated their shapes with coloured pens and pencils.   Due to some of the older ones breaking into songs (with actions meaning they couldn’t use scissors!), some of them went away to be finished at home.

Later that day I did the same activity with the Guides.   They are older and we had more time so the garlands went away completed and with a bit more detail.

What Easter crafts have you done with your kids?

A little while ago, the Head at my little ones’ school asked if  mums would like to start any lunchtime clubs, such as a craft club.   I already help out once a week as a Parent Helper in a KS1 class and love it, so an extra 30 minutes at lunch time once a week crafting with kids would be a bonus.   Another crafty mum also volunteered, so eventually we got together, made a few plans, and waited to see who would turn up.

Week one, we had 40 children from year one to four!   That was a bit of a shock to the system, especially as we were making pin badges.   The children all decorated a paper circle which I put through a badge machine.   This serves as a name badge so we can identify the kids, and also as they leave it behind after craft club, we can use it as a register to see who turns up.   With 40 children crammed into a spare classroom, we’ve  had to close the club to new members, but if some don’t come back for a few weeks, we can open up new places to kids who have wanted to join since.   If you don’t have a badge, you ain’t coming in!

Somehow, while I was punching badges, the other mum managed to get ideas from the children about what activities they wanted to do in future.   I think some expect a host of sewing machines to appear so they can make cushion covers, or multiple tools for jewellery making, but some were doable.

Week two was a bit easier due to a school trip taking half the children away.   One of the ideas was to make a diary of all the things they’d made, so a simple piece of coloured paper, decorated as they wanted, and folded with a couple of pieces of A4 made a notebook.

Week three was back to a full strength class of around 30 children.   We collected together some magazines and the children made collages.   Some were random pictures, others were fashion collections, bedroom designs or composite pictures.   The mess at the end was amazing, but they had great fun with scissors and glue.

Hopefully as I get more organised, I’ll take some pictures and blog about the activities in a bit more detail.

Does anyone else craft with lots of kids or run a school club?

My two little girls are my craftyguidelets.   The eldest is 5, and although she’s definitely daddy’s girl, her ambition when she’s a grown up is to be a mummy.   I’m not sure which part of my job she likes, but I must be doing something right!   The youngest is almost 3 and a mummy’s girl.   She can sing a great ‘craftyguider dot com’ jingle.

One of my aims for this year is to bake regularly with the craftyguidelets.   They love baking but I have to make sure they don’t bake together as they are so competitive.   There’s only so much mixing a cake can take, and the step ladder really only takes one girl at a time.

They both joined forces with daddy to make my birthday cake, and this weekend we did more baking.

They taste great whether you eat gluten or not.

The 5 year old chose a gluten free light sponge from the book.   I think she was swayed by the icing on the top.   This didn’t go as well as the muffins.   I think I need to experiment more with oven temperatures and timings, but we ended up with a nice cake.

The icing is actually pink, but it’s a bad photo.

She’s part of the fifth or sixth generation of bakers in our family.   My dad is a master baker and confectioner so it’s in her genes!