Having spent a day at Buckingham Palace at the WI Royal Garden Party, the next big event in the WI’s centenary programme was the Annual Meeting at the Royal Albert Hall.   Delegates from across the country attended and it was a fabulously grand occasion.   Unfortunately, I wasn’t there but did get to see a live transmission of the event at my local Cineworld. 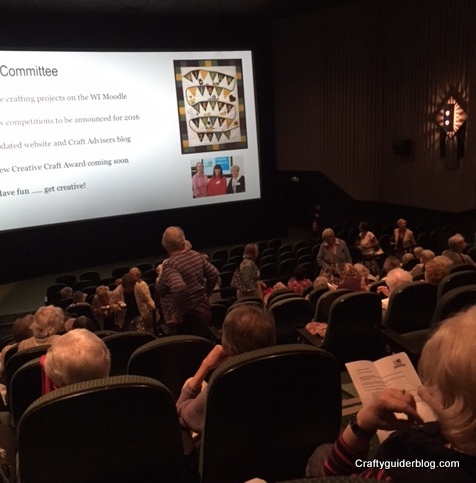 OK, the surroundings weren’t as jaw dropping as the grandeur of the Albert Hall which I did experience a few times when I was younger, but the live transmission was a great opportunity for ordinary members up and down the country to get to see the event.

There may have been sound problems in the hall, but we heard everything loud and clear.   Janice Langley, the NFWI Chair looked incredibly nervous when the royal party of HM The Queen, Princess Anne and Sophie, Countess of Wessex were on stage with her, but she didn’t put a foot wrong. 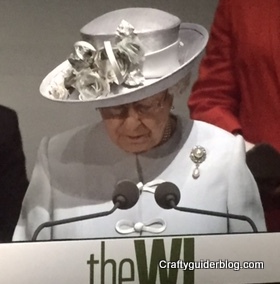 There were three excellent speakers.   Lucy Worsley who is going to be on our screens soon with a history of the WI, gave a fascinating insight into her research on the subject.   Dame Tanni Grey-Thompson spoke about her life and achievements in sport and now in the House of Lords, including her family’s motto ‘Aim high, even if you hit a cabbage’.   Finally Helena Morrissey, CEO of Newton Investment Management spoke about the 30% club which she founded to try and get at least 30% female board members.

There was also a selection of songs by the Bleadon Belles who won the choir competition, and a presentation of the knitwear collaboration between WI members and Kingston University to produce garments for their university fashion show.   I don’t think I’ll be wanting to wear any of the garments, but the work to produce them was fabulous.

One of my favourite (and possibly most confusing until we got our heads around it) parts of the day was the debate on the NFWI Resolution “Failing to care – assessment of need in long term care.   This meeting calls on HM government to remove the distinction between nursing care and personal care in the assessment of the needs of individuals, in order to advance health and wellbeing.”  When we discussed it at our local WI level, we were confused about what the resolution was trying to achieve, and whether it was possible to do this.   At the meeting, there was an amendment to the wording, so there was a vote on accepting the amendment.   This was passed, so then there was a further discussion on the amended resolution before a motion was put forward to move to the next business (still with me?).   Speakers then voiced what we had felt at our meeting; the resolution was just not what the WI should be working towards.   The care system was in need of an overhaul, but new legislation, lack of government funding, plus the wording of the resolution which wasn’t specific enough, meant that it needed more work.   The speaker from Stoke Newington WI really clarified the position for me using the SMART criteria for setting objectives.   The motion to move to the next business was overwhelmingly passed so there was no vote on the resolution.

I really hope that there are live transmissions of future events.   It was so interesting to see how our WI is run and it’s a shame the annual meeting is only open to a few delegates from each federation.