I don’t work with other people.   The majority of my social interaction in a day is talking to children, or talking about children.   Apart from my husband and a few mums on the school run, I don’t get any grown up conversation at all. 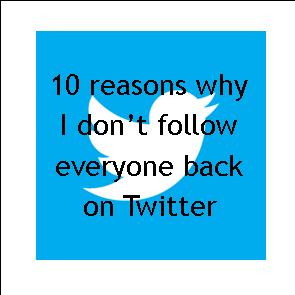 Then a little bird came into my life.   I discovered twitter some time ago and I’ve made some great connections on there.   Some people I’ve met in real life, others I’d love to meet.   Twitter connections encouraged me to start Craftyguider, to try crochet, I’ve had support when I was down, ideas to put into my Guide meetings and hopefully I’ve managed to inspire and help others occasionally as well.   I’ve still got a long way to go to be as popular as some, but I hope my ramblings in 140 characters are mainly worthwhile.

Recently I’ve been followed by people doing the Purpledog Challenge.   The object is to follow 10 new people a day and they follow you back to increase your business network.   Some timelines interested me so I followed back, but others just got ignored, which is what inspired this blog post.   One person seemed to send out her 10 tweets a day just saying “@—– I followed you with the #PDChallenge. Please follow me back.’   However she didn’t seem to tweet much else.

Sometimes I don’t have the time to sit down and go through my new follows for a few days, but I do try and keep up regularly.   And sometimes I even take the time to be proactive and browse through some of the suggestions Twitter puts forward, and sometimes, they are even relevant to me!

Why do I choose to follow back certain accounts on twitter and not others?   This is the top 10 I came up with.

1. Auto DMs – “Thanks for following me.   Check out my FB page and like me.   Visit my website.”   This is spammy.   If you want to thank someone for following you, make the effort and manually type something.   I’ve had people tweet to me and say they liked something from my website.   It may be something they looked at for 2 seconds on my homepage, but it felt like they had made an effort.   An auto DM has me reaching for the unfollow button.

3. Just retweets.   Do you not have anything to say for yourself?

4. Over hashtagging.   They are meant to make it easier to search for something, not to take up most of the 140 characters.

5. People who just sell things.   Yes, it’s nice to see what you make, but if it’s not something I want to buy, you aren’t providing me with any other reason to follow you.

6. No interaction.   It’s like someone who just talks at you all the time and never bothers to listen.

7. Thanks for following.   It’s OK, but some people just tweet thank you’s and forget to tweet anything else.

8. Retweeting every tweet you are mentioned in.   I’m pleased that you have received a lot of Follow Friday mentions, but do you really need tell us about every single one?

9. Follow Friday’ing everyone in your follower list or everyone who has interacted with you in the last week.    Just pick a few who you really enjoy interacting with and explain why I should follow them, rather than a long list of names.

10. Just following people who follow you back.   I’m sure my tweets don’t interest everyone that I follow so I don’t expect to be followed back.   As long as what you are tweeting interests me, I’ll stick with you.

I’m not into twitter for the number of followers.   I’d love it if everyone bought things from my website, but it’s not why I’m on twitter.   I belong to a SOCIAL network where people interact, share and support each other.   I love having friends in my phone.

What annoys you most on twitter, or what keeps you addicted to those 140 character messages every day?