I have a board on Pinterest for kids craft ideas for craft club.    One of the ideas that I put on there was paper plate weaving which originated from the aesthetic outburst blog.   I modified it a bit for our 5-9 year old crafters and came up with the following. 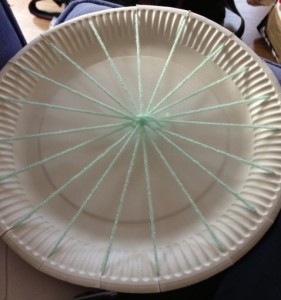 I cut 19 notches around the edge of the plate and wrapped some wool around it evenly.   I chose an odd number so the weaving would alternate the unders and overs.   I knotted it off so there was a small end in the middle to start the weaving with.   Doing this 30 times got a bit repetitive, but because our crafters are young, it was necessary to make it slightly easier for them.

The parent leaders of the club had lots of wool to play with, thanks to the donation of a huge stash by the lovely @meanyjar.   We cut lengths of various colours for the kids to choose from, and tied in one strand at a time for lots of over and under work.   This activity lasted three 30 minute sessions, and even then, most children took home some wool to carry on with.

These are a couple of works in progress.   There were some which were ‘less neat’, but the children all worked really hard on them and were really proud when they took them home. 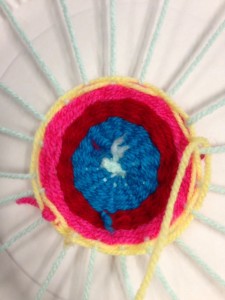 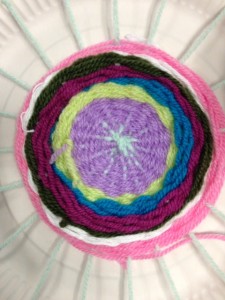 And this one is my 4 year old’s effort (with some help from mummy).   She is at nursery and finishes school midway through the lunch break, and the lovely teaching assistants deliver her to craft club on their way to lunch.   She doesn’t always get the chance to do a full project so we did this at home.   I gave her a large needle threaded with wool to make it easier to do the weaving.

Time to trawl Pinterest for more ideas for after half term!